We were contracted by Firecat Studios in Texas to overhaul this antiquated (originally built in 1999) system, basically from the ground up. This application handles the state government's reporting for all emergency services within the state based on COGs (central organized government), quarters and years. The entire system was rebuilt using jQuery driven front end over PHP and a Postgresql database to create a RIA approach to this government application.

The system's purpose is to allow the reporting of 911 emergency services by COGs to CSEC (Commission On State Emergency Communications) on a quarterly basis. COGs contain what are known as PSAPs (think your local sheriff department) that are monitored by each COG. Per state laws each COG must monitor and report the activity of each of the PSAPs within their district each quarter along with any variances of their numbers when compared to the initial data entered by CSEC.

The data is broken down by 11 different areas of reporting as well as a 10 year equipment replacement schedule for each PSAP and COG office.

Access to data, and the ability to edit data is based on user level and what timeframe the person tries to edit the data. Each COG must report their data no later than 15 days after the end of a fiscal quarter. Many fields within the application are also 'locked down' based on the user's level, CSEC administrators have the ability to edit many fields a COG may not. Along with these data entry and administrative levels there is also a read only user level since the data falls under the heading of 'public information'. Instead of giving these different user levels different screens for each section we lock down fields using the user level in their log in.

Our main goal was to make the application as easy to use as possible for data entry by the COGs. The old system required page load after page load to enter data, sometimes required 5 or 6 clicks to get to the forms they needed. Our system handles all the data and forms for each section of the report in one page. If you noticed the network testing screen shots to the right you will see some examples of this. The first screen shows the initial page load. The second screen shot show the top inputs open for editing by simply clicking the edit button, to save the data they simply click the save button and the data is transmitted to the database via AJAX.

Likewise adding or editing data (please see network testing adding data thumb) simply requires clicking a button and the form is loading into the page dynamically. Once the save button on the form is clicked the form is validated and if valid saved to the database via AJAX and the form is removed from the layout. Essentially every possible function for each section of the report is within one screen.

Along with the report sections is a 10 year equipment replacement schedule. This section of the application allows CSEC the ability to track the age and scheduled replacement costs associated with both COG offices and PSAP offices. The system allows them to move money and equipment ages through the COG and PSAPs all while tracking what the old amount was, who made the changes and when the changes were made. Changed fields are highlighted and made 'clickable' allowing a hidden div to appear with each fields information.

The system also handles all reporting as required by Texas law, along with a full set of administration tools to manage users, PSAP and wireless carrier information along with many application variables such as the form drop downs used within the application. Functions such as managing users are handled in the same 'one page' functionality. 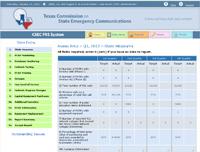 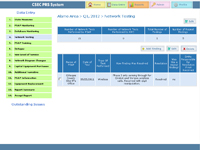 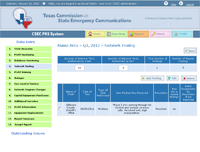 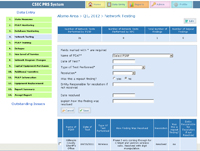 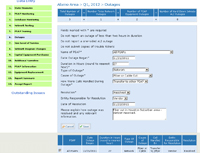 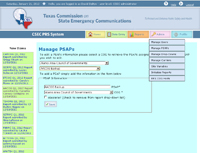