Please note: The description on this project has been abbreviated dramatically. An entire book could be written about what this application does. Hopefully I am able to portray the power this application has here.

When I first walked into this company’s offices in 2002 they were literally buried in paper. Paper was stacked three feet high on everyone’s desk! It didn’t take long to know they needed some serious help!

After several meetings I began to see the problems and special circumstances this company needed to address. Their business was selling merchandise to the US government via its normal bidding system. Thousands of RFQs (request for quote) were downloaded every day from the government using a 3rd party piece of software. This software only allowed the requests to be printed. After 2 - 3 hours of printing every morning a secretary split up the requests so the proper salesperson could quote the part. From the time the requests were downloaded to the time the printed requests made it to the salesperson’s desk was anywhere from 8 hours to 3 days!

One problem that quickly became apparent was getting the data directly from the government. It just wasn’t possible at the level this company was at so we needed to keep using the third party software and service to grab the requests. There was an option in their software that allowed for exporting the data but I quickly found the exported data was as ugly as the application itself, will over 250 fixed width fields per row of data and 4 different date formats in different fields, some not even y2k compliant. But it was all we had.

After several weeks of meetings and a lot of searching we decided this application had to be built form the ground up as there was nothing like it in existence. I built the application in stages and added modules as I finished them to allow the staff to test and make suggestions on the new modules. The entire process took approximately 10 months but the final product was well worth every minute spent on it.

The bids were now downloaded into the third party application and exported to a file. That file was then imported into my system in a process that took approximately 2 minutes to rip through 5 - 10 thousand rows of data. The import process was as follows:

Once a salesperson logged into the system they could search or browse requests via 5 different ways and in 3 different views. Once into what is known as "bid view" every detail and piece of needed information was within the page. The salesperson could just approve the bid with the program suggested price, they could alter the price, mark the bid for further review, mark it to be looked at at a later date or delete the bid from the system. No more paper and requests made it to the buyers in minutes, not days! The icing on the cake was when we saw the amount of bids salespeople were now able to output in a day. Literally they were able to get through 10 more requests per day (requests they were able to bid on)

At the end of each day another module within the application ran through the database and pulled all requests that were approved for bidding. The module then created PDF files with the required bidding information, formatted into separate files depending on which government website the bid had to be entered in to. From this point the staff was able to enter bids into these websites and the process was completed.

Once the bidding tool was completed we had to address award management. Similar to the RFQs, and award file was generated every day by the government. Phase two of this project saw the creation of an entire award tracking system that tied the original request information with the newly generated award information.

Finally a set of tools was created to edit, update and manage all aspects of requests and bids. It should also be noted that each buyer had their own log in information and were prohibited from looking at other employees bids, quotes or awards.

Again, I could go on for days trying to explain the intricacies of this application. This is an extremely abridged explanation of this massively powerful application.

back to our web applications projects section 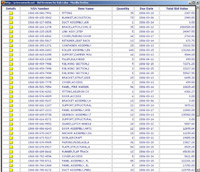